After the last few posts of things completely unrelated to computers, it’s back to business with round 3 of CyberCenturion. And what a tough round it was! The American teams seemed to say that it was difficult, so our teams were able to brace themselves, but there were so many things needed to be completed. However, no-one expected so many vulnerabilities that needed to be sorted, with a total of 44 to find for the Windows 8 image. This was also my favourite image in terms of user accounts that should be on there, using the characters from Airplane! (one of my favourite films of all time).

The round started off well, as we didn’t receive the password to unzip the images for 20 minutes, so that took away from the total time available. However, putting that aside, the teams got on with finding the problems once the images had extracted. After three quarters of an hour, our teams (17, 18, 19) were in positions 17th, 13th, 1st respectively. 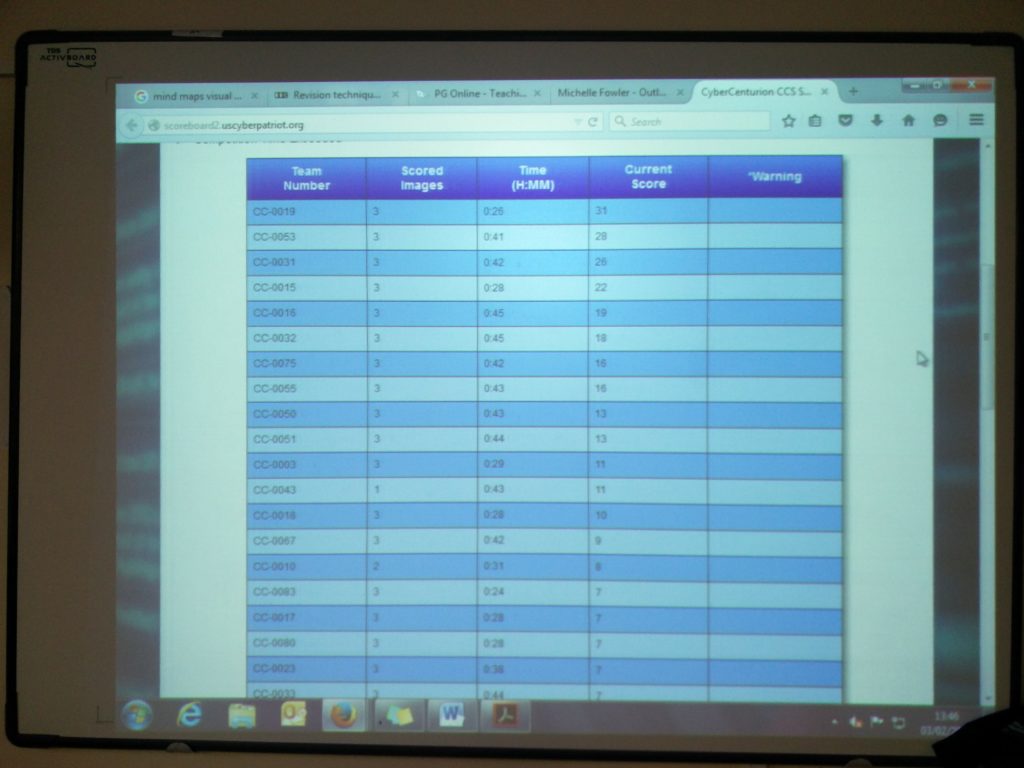 After an hour of the competition, team 19 were still in the lead, team 17 had risen to 16th place, while team 18 were quite a lot further down the scoreboard, accidentally hampered by them having a 15 point penalty from removing some accounts that shouldn’t have been. 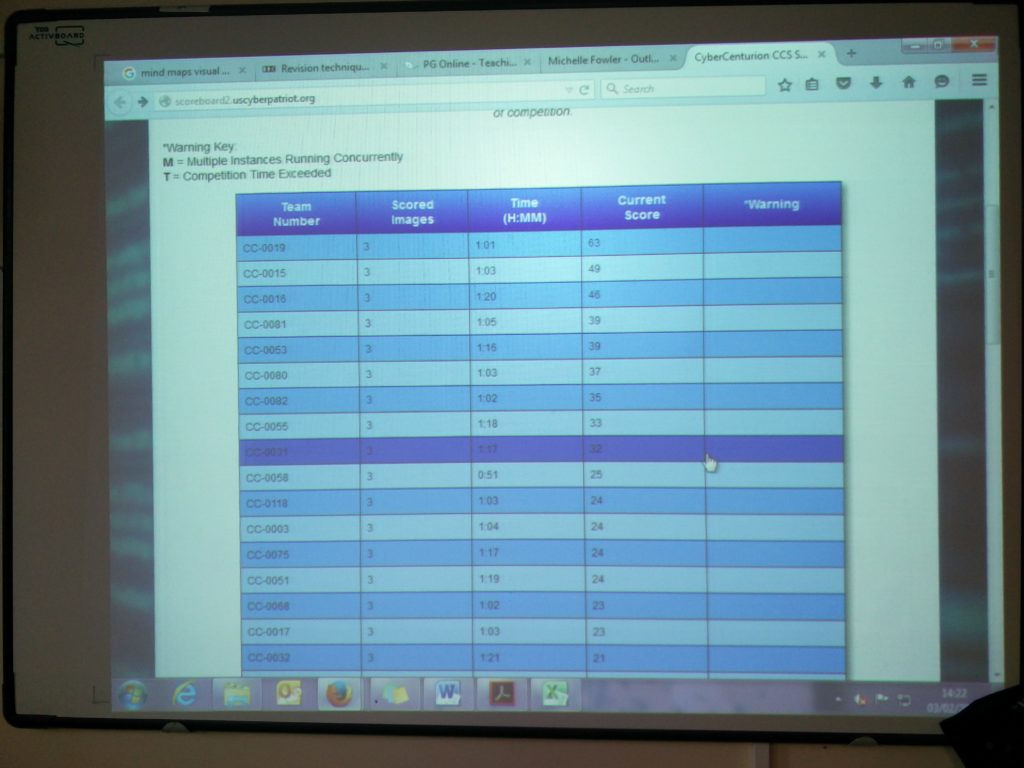 Once the teams had been running the images for two and a quarter hours, team 19 were still in first place and near to passing 100 points, team 17 had climbed to 9th place and team 18 were unfortunately struggling slightly, as they were off the top 15-or-so teams that were viewable on the scoreboard. 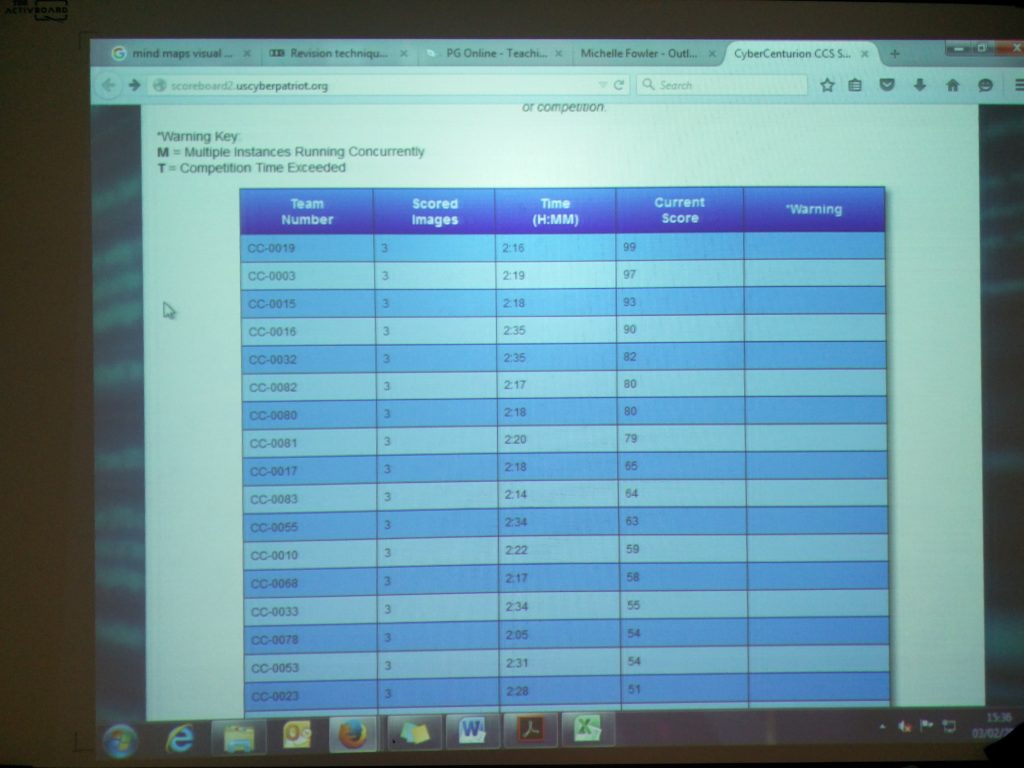 At the three hours and twenty minutes mark, team 19 had passed 100 points but had dropped to 3rd place, with team 17 dropping to 14th place. Team 18 were still lagging behind, but were starting to find a few more problems with the images. 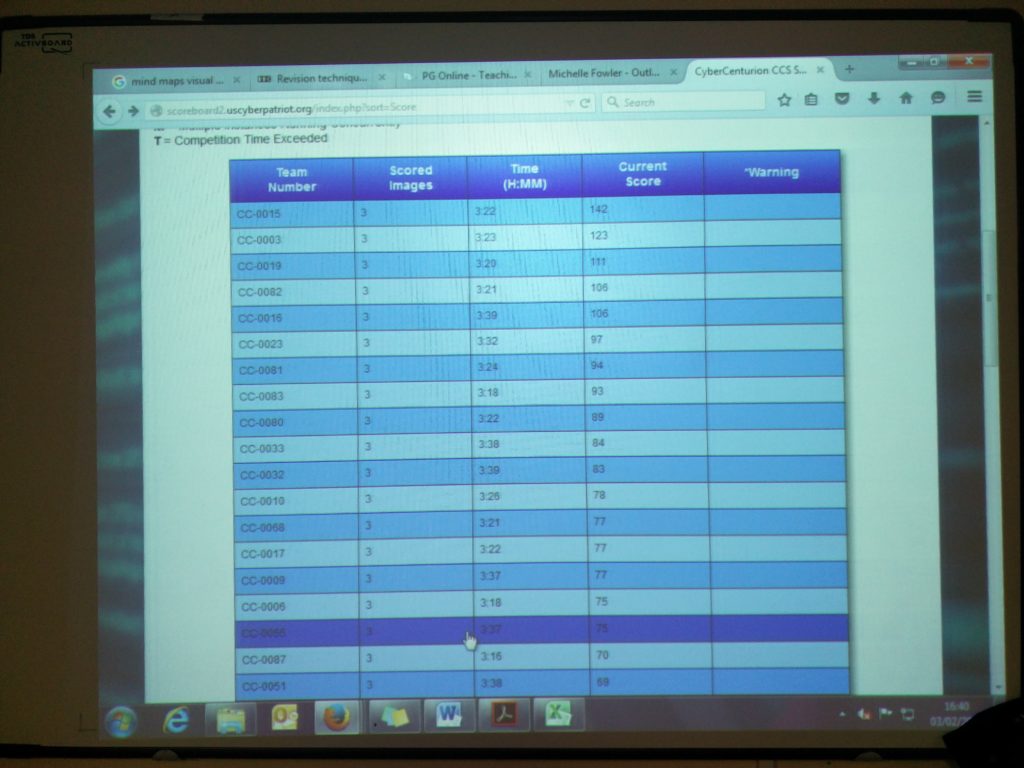 One hour after that, at four hours and twenty minutes, team 17 had climbed back up to 9th place and team 19 had gained back a place to be in 2nd position, with both of the teams going over 100 points (out of a total of 300). 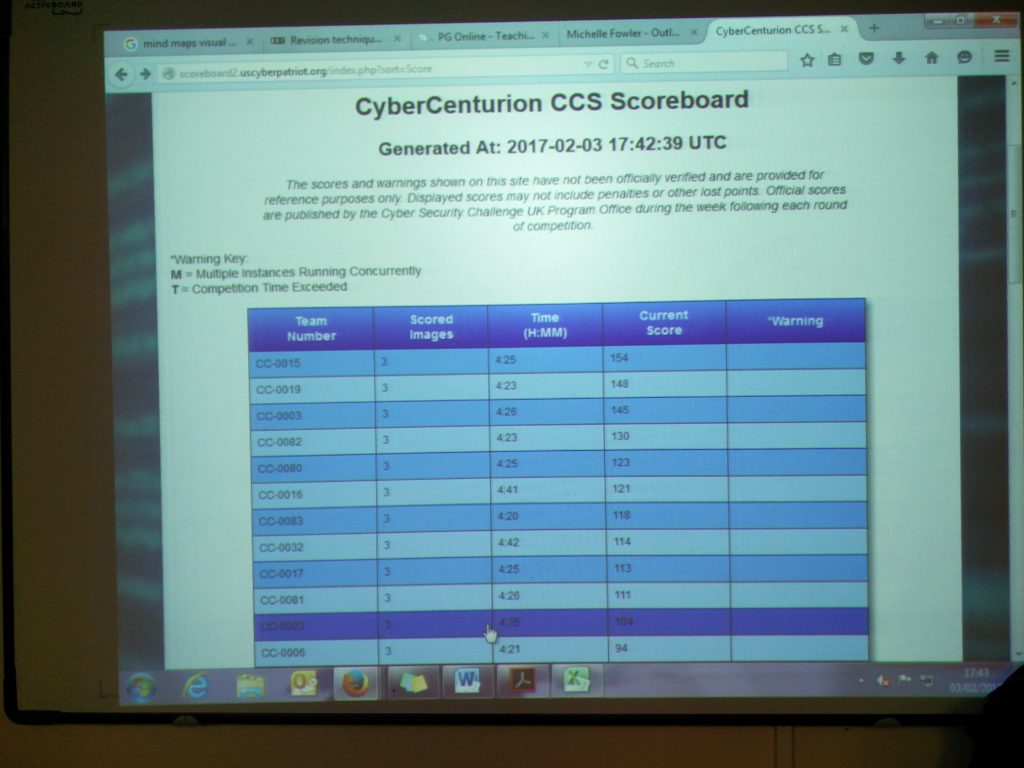 When 7 o’clock arrived it was time to finish to prevent any penalties. Team 19 were in 1st position with 166 points, team 17 in 4th position and team 18 were 27th place. This put at least two of our teams in a strong position to progress into the final, should the teams taking part over the weekend not push them down too far. 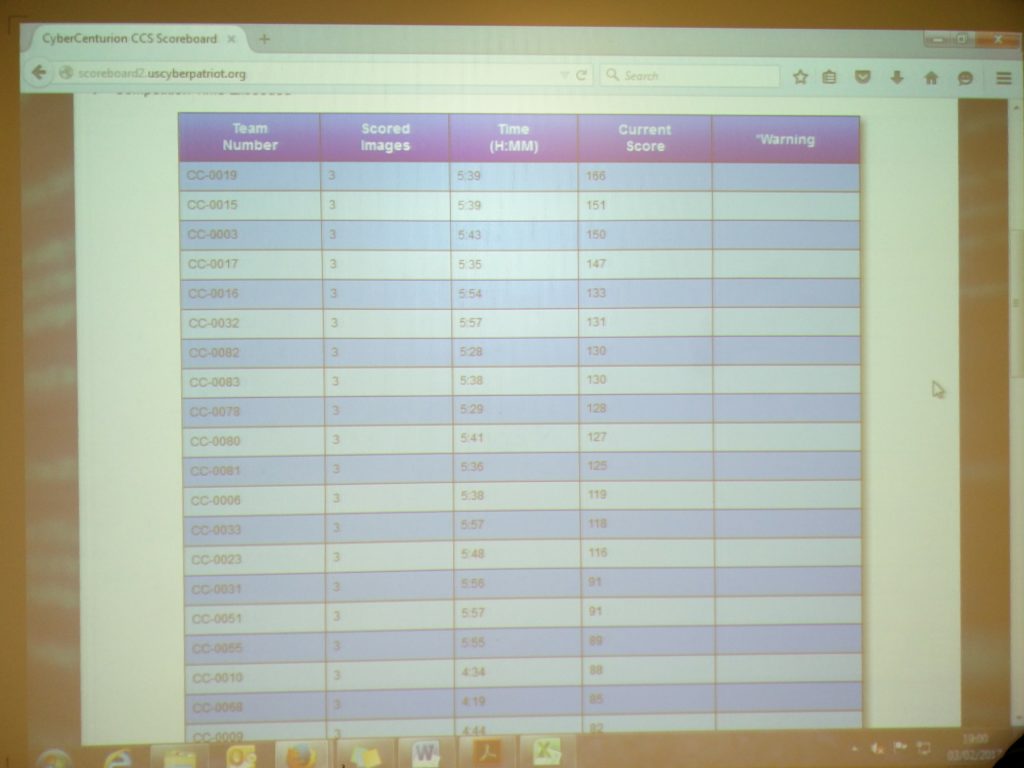 After the Saturday teams had taken part, our teams were still in the same positions as they were on Friday. 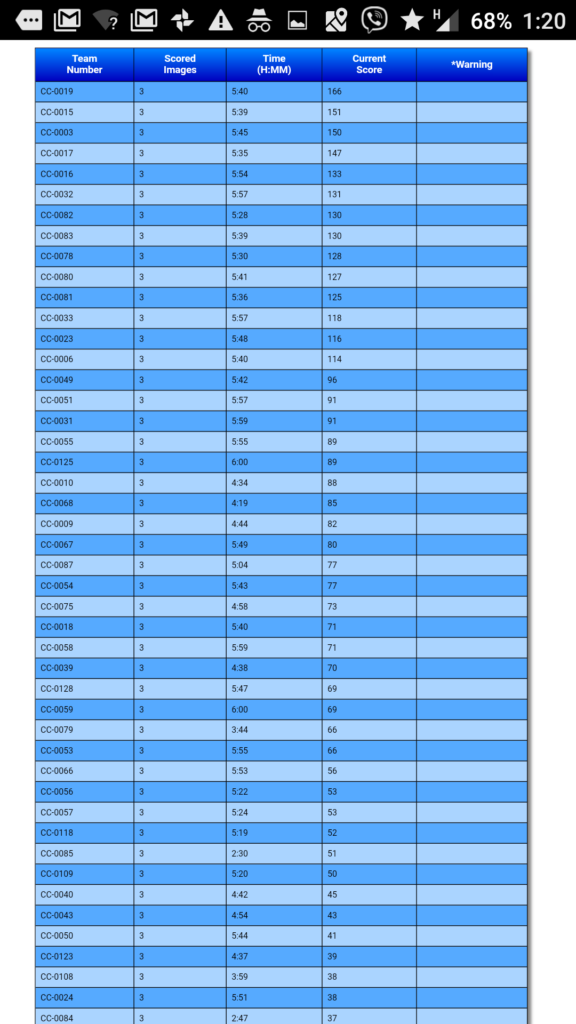 However, once the Sunday teams had also looked at the images, team 92 came out on top with a score over 200, pushing our teams down by one place each. Hopefully we will still have our two teams in the final, but until the official scores are published we can only guess. 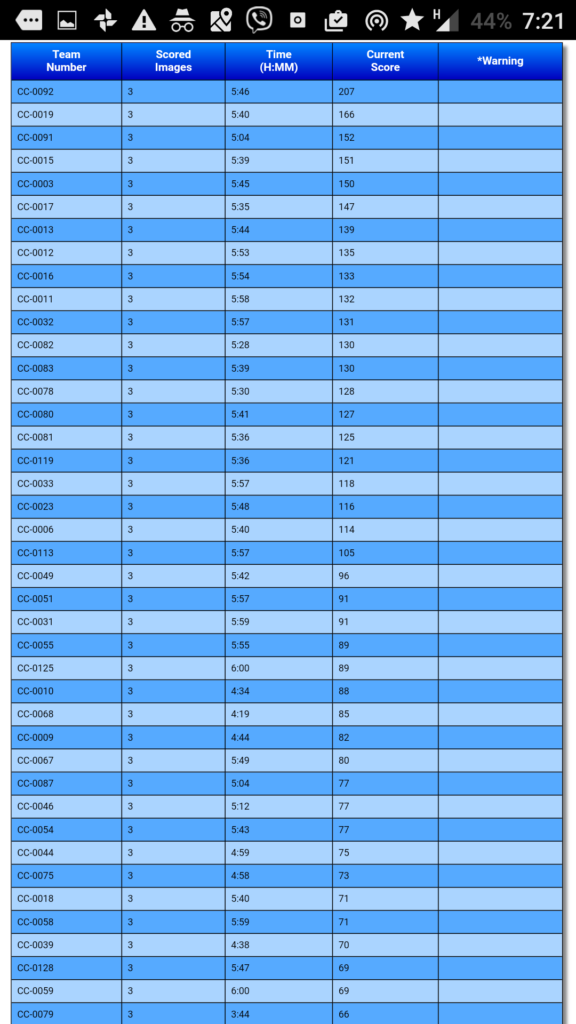