I haven’t been to any illuminations for a number of years. Therefore it was a change to go on a weekend trip to see some. The ones that we went to see had a twist on the usual lights hanging from lamp posts or on fancy displays – they were on boats.

Obviously, illuminations don’t work that well during the day, so the coach trip we were on stopped at Buxton for a few hours on the way there. This was somewhere we hadn’t been before, so my whole knowledge is that there’s a famous bottled water made there. Besides that, it was a lovely Victorian town with a large park to walk around and fancy buildings. Surprisingly, there was a well there too.

After spending a few hours there, we were taken to a heritage railway (operated by Peak Rail) to get a steam train from Rowley South to Matlock, which is where the illuminations were going to be taking place. Unfortunately, we’d had a message earlier in the week to say that the usual steam train was out of service and a diesel would be used instead. While not as fun, it was still a nice ‘pleasure trip’ to go into old style carriages.

The journey itself took half an hour, and once we’d alighted at Matlock we returned to the coach to travel to Matlock Bath.

After having fish and chips at one of the shops along the riverside, it was time to go and visit the illuminations, which were being held at Derwent Gardens. Helpfully, we’d pre-booked our tickets, which meant we didn’t have to queue up with everyone else in Matlock Bath who hadn’t.

Showing the tickets, we were then flagged through by the security people there, and it was time to enter the gardens. 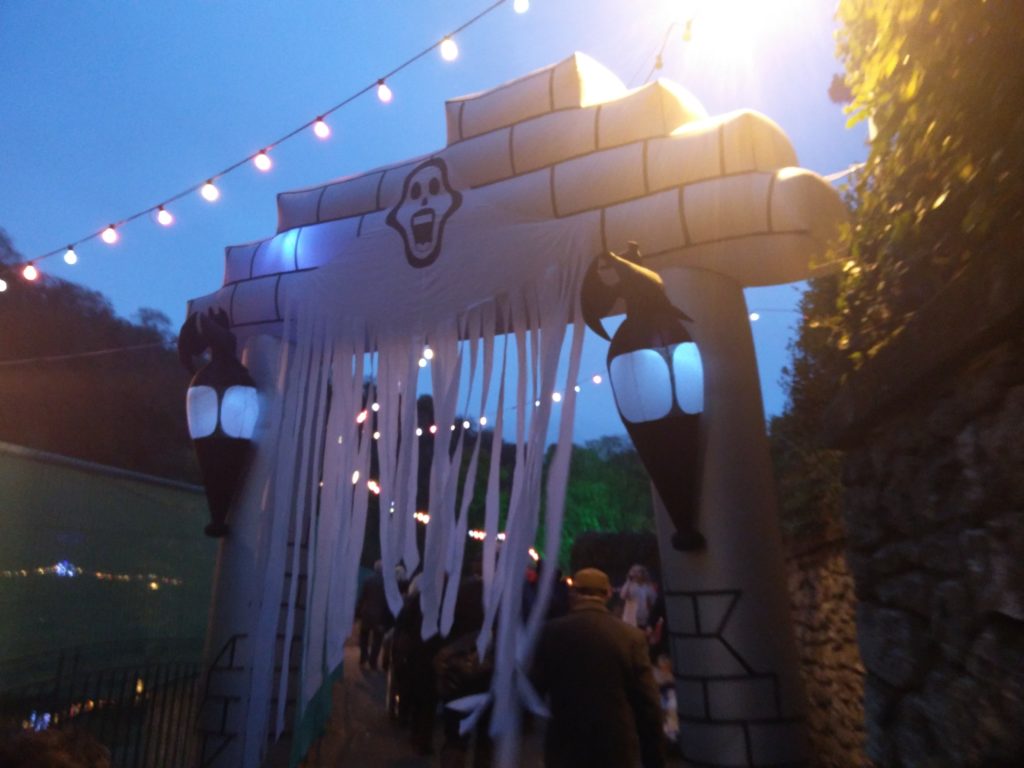 We then had chance to look around at the decorations and lights that were hanging from trees and strung along the river bank, plus we found a spot to stand at that allowed us a clear view of the river.

Once we’d found a place to stand, it was announced over the tannoy system the procession wouldn’t start till 7:45pm. It was around 6:30pm at this point in time, so we were in for a long wait. There was some entertainment going on, on one side of the river, but we were on the opposite bank. Occasionally we saw balls of fire (from a fire eater, hopefully) and joined in some of the moves the audience were told to do.

Eventually, after what seemed like forever, the time rolled around for the boats to move out onto the water, turn on their lights and parade around the river.

There were 8 boats in total (9 actually, but one had to berth back up so didn’t come past us) all with various moving parts and animated lights. The rowers were all friendly as well, often stopping to wave at people (Side Note: People don’t wave at each other on boats I’ve noticed. When we’ve been on cruises, people just stand there and look at you. When I’m waiving manically at them, I just look weird. This is something I’m on a mission to change). Here’s them all in their full splendour as they sailed past us (click for animations):

Our favourite boat out of them all was the “ship in a bottle” one, which we thought was very well executed.

After that, it was time to make our way back to the coach before it left for the hotel we’d be staying at. If you’ve never moved your legs for 2 and a bit hours, you’ll know how we felt. To put it into perspective, it was like we’d forgotten how to walk. Once we were near the coach and past the crowds, we managed to get a glimpse of some of the fireworks that were part of the display.

The next day we headed to York. It’s somewhere that we’ve been before (exactly one year before this trip) so didn’t want to walk around the town again. Therefore, we decided to go to the National Railway Museum instead.

It had been many years since I visited this museum. Most of the trains were the same (well, they’re quite large to move and are famous so don’t need to!) but as I’d forgotten most of it, it was nice to have a look around again. We only had a limited number of hours before needing to get back onto the coach, but it gave us plenty of time to have a look around at the exhibits. Here’s a selection of images that I took, so that you can feel as though you were there too (including a rare photo with me in!).

Overall, the holiday was enjoyable and allowed us to see do things we hadn’t done before. If you’re up that way, you probably know about these places and events already, but if you don’t and are looking for a slightly different weekend break away, this may be for you.