There’s certain programs that I don’t like to touch with a bargepole. Once they’re running, I leave them to their own accord and try not to think about them too much, otherwise they’ll break beyond repair. The program in question today is Sage Accounts, which deals with all of the invoicing for our school. Actually, before we go on, I’ve been wanting to use the interrobang for a while (I think it has one of the greatest punctuation names ever) so I put it in the title. I hope you enjoy seeing it too (assuming your computer recognises it).

Normally when I get a call from the finance manager in work it’s either due to me sending too much or because I’ve forgotten to do something. Bracing myself, I answered the phone to be greeted by a much more different question: “Sage is crashing when I’m opening it“. Apart from not knowing much about the program besides it does financial stuff, I said that I’d be up to have a look to see what I could do. Little did I know what would await.

The user went and showed me what was happening once I’d arrived at their office. They could open Sage, but clicking on a record and opening the ‘activity‘ screen, it would flash up the records for a half second then close down completely without so much as an error message. To rule out the computer, I asked them to log onto a different one and see if the same problems would happen. It did.

Next is was a case of ruling out the users account itself, so I asked them to log in with the special ‘manager‘ account and see if the same problem would happen. It did. However, upon opening Sage again after this crash it prompted to ‘Check for errors‘. Dutifully we clicked on the ‘Yes‘ button and let it get on with its job.

20 million errors. 60 million warnings. 2 million comments. However we looked at this, it was not good.

The only message that we got was ‘You much restore backup data‘. While we keep backups of all of our servers, as you can see from the image, we’ve had problems with the data for a while (March, supposedly). Therefore, the advice it gave wasn’t very useful as we’d been backing up bad data in the first place. Asking the finance manager why they hadn’t been checking the data gave me two answers:

Looking at our options, we decided to contact Sage to see what could be done. After getting through to their technical support department, here’s pretty much how the conversation went:

Us: “Sage was crashing when trying to view the activity screen and it then prompted us to run the error checker, which is now showing a number of errors”
Sage: (Following their normal line of questioning) “OK, and how many errors is it showing at the moment?”
Us: “Erm… it’s saying we’ve got 20 million errors”
Sage: “How many errors‽” (I’ve got to get that interrobang in again somehow).

As usual with technical support, they asked if they could remote in to have a look at the problems themselves to see if anything could be done. After browsing to the main Sage data folder they tried to open the raw error, warning and comment files. Unfortunately, due to the 4GB file size of some of them, it was not possible for the computer to open them.

Quite smartly they decided we should restore the backup from the previous night before any of these ‘error checking‘ changes were made. That gave us a slightly more reasonable number of errors, but still it wasn’t operational.

After telling us off for not running all of the routines that are built into Sage, and for continuing to run the program after there being errors, it was decided to send the data off to Sage for them to repair it. They did tell us that the recovery process would cost likely remove some data, and it was just a case of seeing how many items would be removed for us to put the paper copies of invoices back onto the system. As it would take a few days for them to process the file, we left it at that until we heard back from them.

The following Monday (it’d been a weekend, unfortunately) we received an email from Sage to day that they’d recovered most of the data. 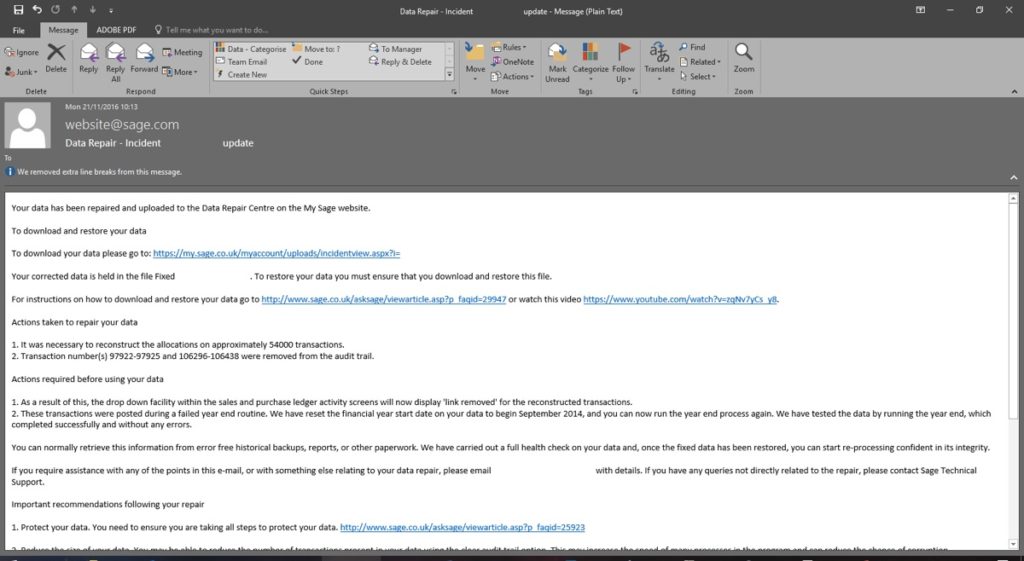 The second point in their email mentioned “These transactions were posted during a failed year end routine“. After a bit more investigation, it turns out that the accountant (the one mentioned previously) ran the year promotion routines in Sage overnight, locked the computer and went home. As our computers are set to turn off overnight, this then closed Sage in an unusual way and therefore corrupted the database. The next morning they noticed that the routine hadn’t completed correctly, so ran it again!

While it’s not great that we’re missing some transactions, at least Sage is working as expected. I think a quick word with the accountant and the company about running routines and not leaving things running overnight without checking with the IT department first is in order too.