After having made a number of cakes full of sugar, this time I’ve gone for the healthy route. Well, it contains cherries, and they’re a fruit, so it’s healthy. Right? I shall again be using a recipe from the book that I received at Christmas, along with the ingredients that it said were needed.

I started off getting the required weight of cherries from the tub that they came in (it was near, and about six had to come out), washing them with warm water as they were covered in syrup and then drying them so it didn’t put extra moisture into the cake mix.

Once they had fully dried they were put into a bowl of flour and mixed thoroughly to make sure that they were coated (which also helps to stop them sinking when poured into the cake tin). 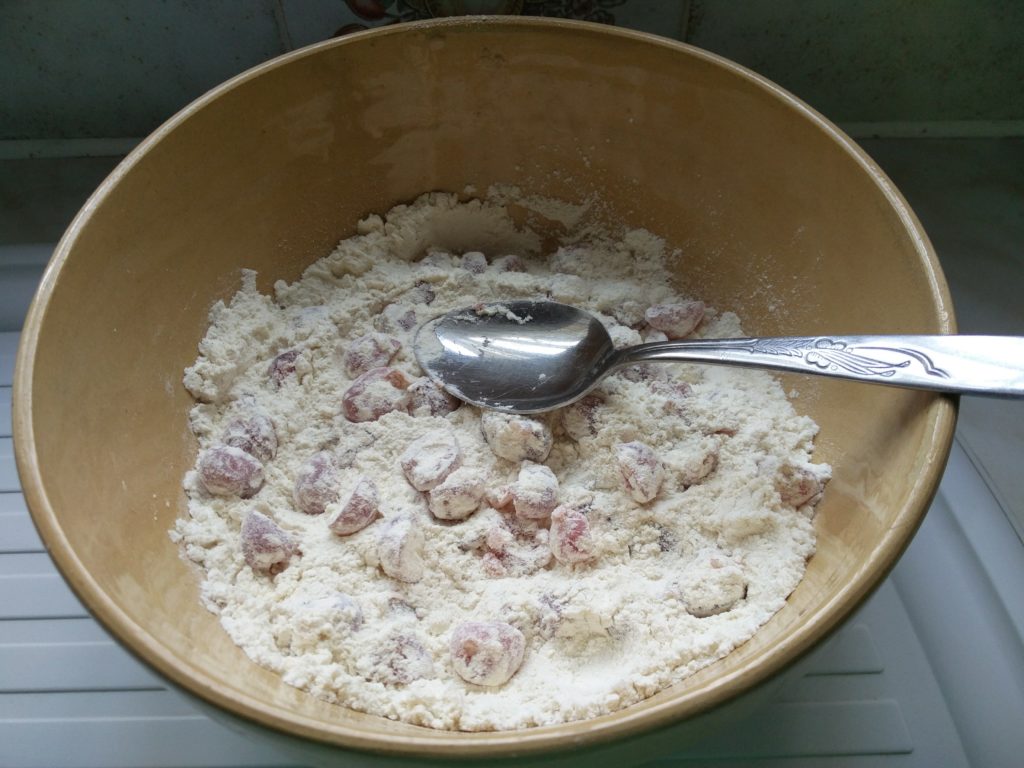 That bowl was then put to the side while the other ingredients needed for the cake mix were put together. These were sugar, butter and eggs. I say “eggs”, as while only one is shown in the images, four were needed in total which is why the mix at the end looks slightly curdled.

It was then time to put the cherry and flour mix into the butter, sugar and egg mix to form the cake batter. This helped to thicken up the eggs to stop them being as curdled, and made it look nicer overall.

The cake mix then needed to be placed into baking tins. Unfortunately we couldn’t find any rectangular ones, and using round ones would have made the cake look not quite right, so some trays that frozen food came in were used instead. They performed the task well, although one wasn’t large enough to hold all of the mix, so a smaller one was used as well. Once the mix was poured into them, it then needed to go into the oven to bake.

Around half an hour later the cakes had baked and risen slightly, so were ready to come out of the oven. They were then placed onto a cooling rack to, well, cool.

Letting the cakes cool completely, they were then able to be cut into slices and eaten. The smaller of the two was eaten first, with the larger one being eaten over a few meals. Both cakes were full of cherries and were moist, but did have a slight taste of egg (from the amount used and lack of other flavouring to mask the taste).